The reviews for the OMA/Progress exhibition at the Barbican have been quite positive and this can be easily justified . The layout is rather unique, mainly because it was curated by the Belgian collective Rotor and their non-architectural point of view is certainly refreshing. Their goal was to make the exhibition accessible to the general public and not just to architects. Even though the choice of exhibits is quite unconventional and one is intrigued  to figure out the architects’ rational (or is it the curator’s way of thinking?) it does imply that there is an aura of genius around anything that OMA is involved with. This might possibly explain why we need to read with religious piety hundreds of emails OMA exchanged with their clients, or see random snapshot of their computer screens. Even trivial things seem important …is this what makes them so wonderful? Or is it the fact that they feel confident enough to publicise without editing  thoughts, documents and possible mistakes?

Actually the publication of private office information does not help that much the visitor  to grasp the whole  ‘work in progress’ idea . It rather seems to be an expression of an architect’s inflated ego (an unfortunate occupational hazard) that urges them to show off in a childlike manner. Not to mention the advantages of advertising and most importantly the establishment of OMA as a ‘brand’ which does not stand out because of a specific design style but through their ‘special’ approach in solving architectural problems . Nevertheless there is something unique about this architectural practice. What is special about OMA  is featured quite explicitly in the exhibition and it is a sort of old-school approach and devotion towards the architectural synthetic  procedure. 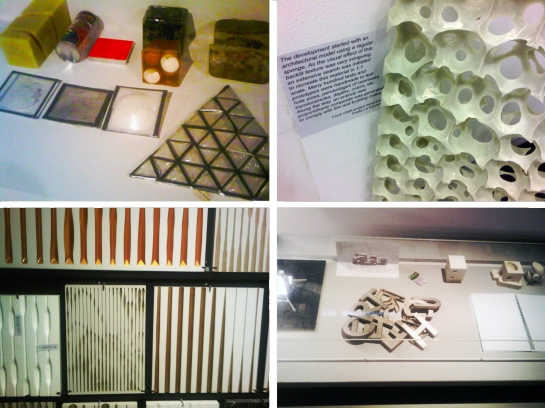 It is obvious that they take the time to experiment on materials and models, when other practices have hardly produced any physical scale models since 3D CAD was invented. Apparently it costs too much and offers too little. Still the building materials on display (often developed and patented by the practice) along with the substantial number of models remind us something OMA know well. That architecture is an art and it ‘speaks’ its own language, the elements of which are those mundane tiles and bricks and the possible ways of experimenting with them.  OMA  do take the time and the risk to step into unknown territories and find new ways to speak the architectural language, even if at times they fall into the trap of believing they speak it better than anyone else.

As far as the aesthetics of their architectural idiom or the ethics of their practice are concerned, the exhibition offers loads of material for the visitors to make up their own minds. After all, one thing OMA cannot be accused of, is being afraid of criticism. Any publicity is good publicity.