The Battersea Power Station has a rather turbulent history and its present continues to be equally eventful. Designed by Theodore Halliday and Giles Gilbert Scott in 1929, it was built in two phases. The first one was finished in the early 30’s and and was true to the era’s prominent style, Art Deco. The second phase was finished in the 50’s and was a mirror image of the first half but apparently not as luxurious in finishes and interior design. The power station was shut in the late 70’s and soon after, during the early 80’s it was listed Grade II which is defined as “ particularly important building of more than special interest”. However, since then nothing has been done to restore or simply preserve it. It has been passed from one owner to the other and eventually all ambitious master plans that aimed to turn profit from the industrial icon of a building, sunk monumentally.

It has been proposed to be turned into a industrial museum, a fun park, a shopping centre, a conference centre, a cultural centre -also referred to as a mini Barbican- a theatre, a hotel, an office complex, a multiplex cinema and more recently a housing project. The fate of the building has also been tied to Northern line’s extension as any investor seeking to take advantage of the Power station is expected to fund it (estimated 200 million pounds). During all these years that the ownership of the Power station has been turned from one covetous owner to the other and the hopes of re-use have been rising and falling like a roller-coaster, the building has been steadily deteriorating. The escalation of its decline peaked when its roof was demolished in 1989 in order to remove machinery from the interior and since then the steel framework has been rotting because its foundations frequently flood.

The building gradually reached a critical state and even RIBA’s former president, Maxwell Hutchinson (regardless of getting planning permission to turn the Power station into an exhibition centre in the 90’s) recently suggested that the four chimneys should be preserved and the rest of the building demolished. However the four chimneys, according to the latest owner of the site Real Estate Opportunities, might collapse at any point due to strong wind hence they should be brought down and rebuilt for health and safety reasons. Naturally there are doubts about the chimneys ever being replaced if they were demolished, the same way that the roof was never rebuilt.

Ironically, the Power station does not face the danger of being mutilated by the developer for its own good any more. In mid-December 2011 REO failed to repay debts of £501 millions to its creditors, Lloyds Banking Group and Ireland’s National Management Asset Agency (NAMA) therefore the latest housing proposal seams unlikely to ever break ground. 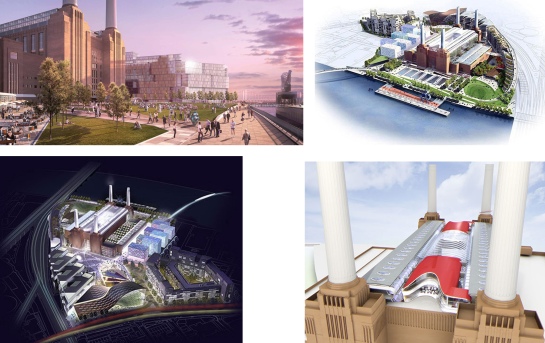 The Battersea Power Station’s future continues to be literally unstable. Since it was listed the intention to preserve it as an industrial architectural monument somehow has lead to the exact opposite result, its deterioration. Or rather the fact that it is listed has turned it into a potential money-making opportunity for those who want to take advantage of it. So is the ‘regeneration’ of the building’s surroundings the only possible solution to the power station’s problem? The gentrification of the area is a very high price to pay in order for the building not to collapse.

The Battersea Power station community group however believes that the building should be returned to the public sector and its repairs should be funded by the Heritage Lottery Fund.The community group has developed a very interesting proposal for the building’s possible uses from discussions through open community planning forum meetings. (http://www.batterseapowerstation.org.uk/bpscg.html)

Since the profit-turning regeneration scheme does not seem to work maybe the community’s suggestion should be finally considered. Capital-driven proposals have always been the prevailing solution to such problems. On the contrary, collectives and communities’ suggestions are seen as naïve and utopian when actually they have demonstrated a simpler and more effective way to sustain life.