Alexander Brodsky is considered one of Russia’s most important and famous contemporary
architects. However his career has been unconventional from the very beginning. He graduated
from Virginia Tech University in 1978 while he was already starting to build a reputation
with his paper architecture projects (which is another term for fictional architecture
that can never be built). This early work is almost a crossover to pure art that tends to point out the political and philosophical repercussions of architecture. Brodsky’s art is so unique and haunting that during the 80’s, he and his partner in crime Ilya Utkin, produced drawings that history has placed amongst the best that Post Modern era has to offer.(see the post on Post-Modern exhibition here) 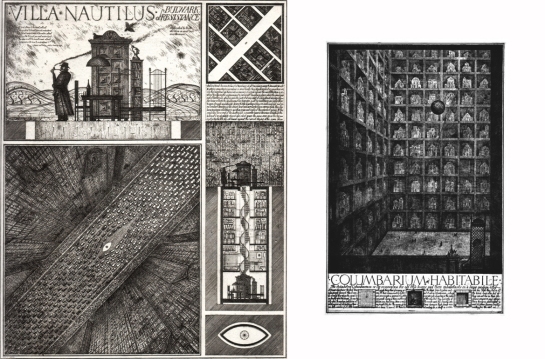 When asked the reason for not getting into architectural practice by the end of his studies Brodsky
has said that the only option in Russia at the time would have been to participate in state-sponsored low-quality housing projects. Not willing to do this, he retrieved into a fantasy world that according to him was not a straightforward political attack on the system, however was inspired by
Russian  politics  and evoked a dystopian feeling that reflected it.
When I visited Calvert22 gallery I actually did not know that much about Brodsky which at times I
consider a good thing in order to have a less biased opinion of someone’s work. I was familiar with his work with Ilya Utkin and I liked it a lot but I was not aware of the magnitude of his success in his home country.
The first room I entered was the White room which had an odd elongated shape. The short sides
had mirrors on them creating the illusion of an infinitely expanding space. The long walls were covered with white curtains and the lights concealed behind  them resembled softly defused daylight.

There was a row of small wooden beds with pillows on them next to one of the curtained walls. They were approximately 1/10 scale which I always thought is an awkward scale in architectural modelling. It looked like a strange dormitory but the tiny people implied to live there were absent. The space evoked a subtly unsettling feeling and reminded me of David Lynch films where little people unexpectedly appear from doors hidden behind curtains. There was also a strong sense of abandonment and isolation.

The entrance to the Black room was not immediately noticeable but walking along the row of beds I saw an opening on the opposite side towards the far end. The black room was actually pitch
dark and the my eyes took a couple of seconds to adjust. Around the corner there was a construction similar to an octagonal amphitheatre. Its roof and walls were only implied by the 3D octagon’s edges and in it were sited a number of male figures around what looked like a hearth. They were all identical which each other and they had weirdly shaped heads. They sat in the same position holding their chins as if they were contemplating something.

Most of Brodsky’s work is described as site specific architectural installation art and looking at previous examples of it, this is actually an accurate definition. Although I have not physically visited them, in the photographs they look very powerful. The White room/Black room installation seems much more cryptic. Both rooms,especially the dark one is very mystical in a latent religious way. Still it is not obvious what the creator is attempting to achieve, nor the connection with architecture is revealed. Possibly, since Brodsky has been producing actual buildings for  the last decade, (having finally established his architectural practice in Moscow) he is able to dive deeper into the production of art when he gets the chance to do so. It seems that the line between architecture and art is not as blurred as it used to be in his older projects. When he makes building, he makes buildings, when he makes art he makes art. Regardless of the field, he is known for his inspired work and I admire his experimentations and fluctuations between the two domains. Somehow it feels that his involvement in both helps him to develop them further. After all architecture is most definitely an art and since most architects have no choice but to be pragmatic it is refreshing to encounter one who has managed to stay truly imaginative.