Collage of visitors posing. All photos taken by the writer

The installation I am writing about no longer exists. However it triggered some thoughts that revolve around the concept of architectural art that seem discussion-worthy. Dalston house was designed by Leandro Erlich and was placed in an empty plot right behind Dalston Junction which is currently one of London’s most fashionable areas. Its production was also attributed to the Barbican and Dalston’s local cafe Oto that is involved in many interesting art projects. The installation was a façade of a small terrace house placed on the ground with a mirror hanging over it in a 45 degree angle. The visitors could lie down on the collapsed “building” in various positions and their reflection would create the visual illusion that they were hanging from the roof or sitting on a window sill etc.

When I first saw the press release and some photos of Dalston house I thought that it was a clever idea. In fact I still think it is a clever idea but the truth is that I was not actually that impressed when I visited it. The reason though had little to do with the actual exhibit.

Barbican’s exhibitions get a lot of exposure. Too much to be exact and I have missed many of them because in order to have seen them I would have to literally queue for hours. The artificial rain exhibit at the Curve gallery (the Rain Room) for example had a minimum of four hours waiting time on most days which meant that I never saw it. This is why I was a bit intimidated by Dalston house. Fortunately one had the possibility to see the exhibit and photograph it without queuing to enter it and naturally I preferred that option. 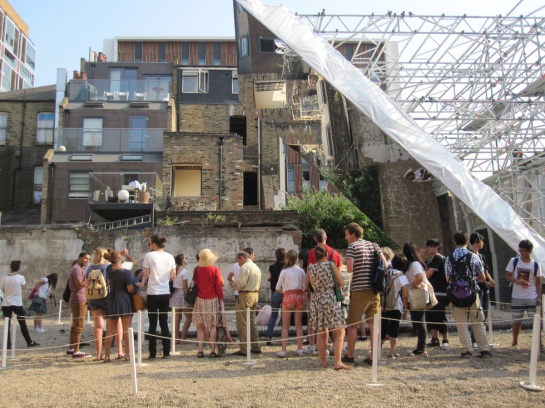 Photographed from the side

How it worked was that every visitor, or group of visitors had a few minutes to assume positions and have their photo taken often by the exhibition’s attendants. When the countdown started they all did their best to pose as creatively as they could. What annoyed me was not the background that the house offered but the crowd that armed with their iphones were striving to get a truly original photo of themselves possibly for their facebook profile pic. I saw little joy, less play and even less spontaneity not to mention the abundance of vanity.

Being a part of London Festival of Architecture, Dalston house got me thinking about the nature of the exhibit. Was it an art project? Was it really related to architecture? Is there such a thing as architectural art and what exactly does that mean? If architectural art exists (as it has been previously discussed in this blog mostly on account of the Serpentine pavilion), its purpose seems to be to trigger people to contemplate on architecture or life within and around buildings. In fact quite a few architects aspire to do so nowadays with their work. They want to believe that their buildings can somehow “enlighten” the users to question the existing social structures. Ambitious to say the least. Being the sceptic that I am I very much doubt this could ever really happen.

As I am increasingly interested in what influences architectural decisions (which I often find that is related to politics and the infliction of power), I believe that projects with strictly aesthetic purposes are less relevant than ever. I am not totally sure about Dalston house’s original intention but my hunch is that its creator meant for it to be playful and intriguing. However for me it ended up being interesting for a different reason. The attraction of a large number of people is the usual measure for how successful a work of art is. Sadly it is not often that commercial success coincides with spontaneity and playfulness. In other words, the queue, the time limit for each person’s visit and most importantly the feeling of one being watched and potentially judged, play an important role on how free one feels to be playful.

From my point of view Dalston house oddly managed to reflect contemporary society’s voyeuristic tendencies. Being photographed while doing something in order to share it in various social media seems more important that actually experiencing anything. Unfortunately art is another product to be consumed. People want to visit such exhibits because they are fashionable and having seen them reflects some coolness upon them. Even more so if they have the photographs to prove it. I might sound a bit too harsh but I stayed and observed for quite a while and I saw no one that entered the exhibit solely with the intention of experimenting and playing with it. Well, this is not entirely true, there was a group of children that looked as if they wholeheartedly enjoyed themselves to the maximum, even though they did have their picture taken too. It actually made me wonder if any of us is even able to just experience an exhibit like this one without secretly craving to be watched.