I went to see the Endless Stairs that have been placed in front of Tate modern for London Design Festival rather negatively biased. It is rare that I am taken by a venture with such extreme exposure. Mostly because if something is that intensely advertised and placed in front of a building as iconic as the Tate, it is obvious that someone will eventually have an enormous profit from it. I understand that this statement might sound a little bit generic and harsh but I truly believe that commercial motives rub off a certain patina on artistic creations which is detectable if someone looks closely enough.

Money makes the world go round and I do not think that companies such as American Hardwood Export Council that financed the “Endless stairs” include in their budgets art projects because they are interested in artistic experimentation. dRMM was the architectural practice that designed it and Arup did the engineering. The promenade in front of Tate modern was a very successful spot to place the stairs because it is one of the most touristic areas in London since the Tate is the most visited art gallery in the world. Naturally deals like this one are mutually beneficial for the companies that make them, especially for the smaller ones. However since big names are involved in this project all the more reason to raise the expectations.

The first thing that I realised reaching the Endless Stairs was that there was an endless queue of people waiting to get on them. I patiently waited in order to have a well rounded opinion but in the end I wish I had not because they actually look much nicer from afar. To be fair, their construction is very sturdy and the detailing is crisp. The side-banister panels are interesting, especially the solid ones. I also liked the columns which support the structure because they are rather lean compared to the stairs that look somewhat heavier, hence they manage to create a subtle illusion of the stairs being suspended in the air. I appreciated all these gestures. Researching more information about them I also appreciated that they are prefabricated and have been designed as an experimental additive system. I believe that their name is a reference to the fact that they interlock in an infinite number of ways, rendering them in principle a quite flexible -and marketable- construction method. 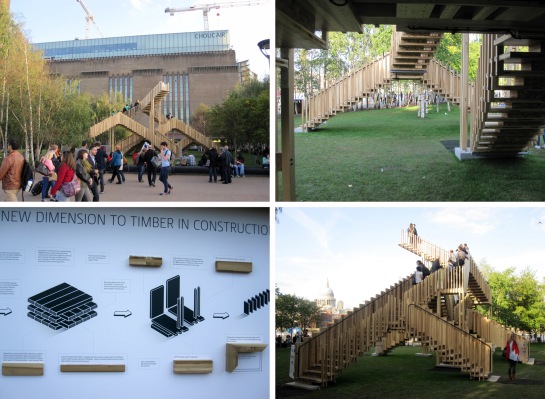 Which gets us to their association to Escher’s stairs that I found to be a rather cheeky promotional trick. These stairs have literally nothing to do with the ones they are supposed to be inspired from. Escher’s drawings of stairs truly bend reality and manage to confuse the viewer to the maximum. This construction is extremely logical and symmetrical and it leads somewhere: to a dead-end spot where one is supposed to admire the view from. Most of Escher’s stairs on the contrary are optical illusions and are connected in a loop. They are meticulously drawn, in order to look real when actually it would be almost impossible for them ever to exist. Thus a fantasy world is created in most of Escher’s drawings and the viewer has to spend some time looking at them trying to decipher how the illusion is structured.

There is no doubt that most architects know and love Escher and ultimately it is an ambitious endeavour to aspire to create something that is supposed to resemble his work. Unfortunately though it seems more probable that the artist’s name was used to attract architects and architectural enthusiasts in order to promote the hardwood product because the connection to the original artwork is quite distant.

Some of Escher’s truly endless stairs

Apart from my unfulfilled dream to disorientate myself Escher-style, the view from the top of the stairs was not worth waiting for either. To conclude and clarify my views I do not think that there is anything wrong with the “Endless stairs” apart from the fact that they are not endless enough. They are an interesting, nicely designed and nicely constructed installation. Like most contemporary architectural products though they come with a story that frankly is very loosely associated with what is finally built. I often find that it would be much better if that story were absent. Naturally then, there would be no excuse to built the stairs, which once again proves my point that they were created mainly for promotional reasons. A company wanted to be advertised thus it brainstormed to find a way and a platform to do so. And to loop my thoughts to the beginning of this article as a humble homage to Escher, the commercial reason behind the creation of artistic products sadly compromises their quality and ultimately their very reason of existence.