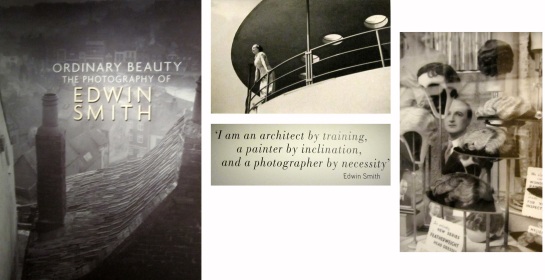 Ordinary beauty is quite an interesting title for this exhibition because these photographs are not very ordinary at all. Smith’s editing eye and the way his compositions are chosen are truly remarkable. The angle of the frames, the light and of course his strategic choice of introducing objects that refer to the human body. In doing so, regardless of the fact that people are usually absent in his photographs, the human presence is always implied. I believe this potentially derives from his architectural training. Usually in architects’ drawings and illustrations the human scale is evident but actual human bodies are absent. Architects are poetic this way. They are trained to be sensitive to peoples’ needs which are supposed to be their priority, however more often than not human bodies are absent in their representations.

My first impression when I entered this exhibition was that the quality of these photographs was superb. Which actually did not explain the fact that I was slightly bored and not very excited to write about them. It took me a whole month I believe to get around writing this article.

Still I cannot deny that I liked quite a few of the subjects depicted. For example the bench with the plants growing through it stayed with me because even though Smith was a trained architect he shows a lot of respect, or one might even say awe, for nature and its ability to take over human creations. In fact in some ways Smith shows he is not that into the man-made environment even though architecture seems to be the centre of his attention. Ultimately architecture seems to be almost a necessary evil in these images when what actually prevails is nature and the decay it brings, which is inescapable.

Undeniably all artists have their own private obsessions. The subjects that speak to them, are their inspiration and what they choose to depict. For Edwin Smith the underlying subject in his photographs is the past or rather a world that is destined to disappear. Hence his pictures are always filled with nostalgia and intense emotion. As I have already mentioned the compositions are great and he is unique in revealing all that is poetic in things that otherwise would have been seen as mundane and unimportant. However there was something in this whole collection of pretty images that did not agree with me.

Probably it had to do with the fact that this overall sentiment of nostalgia is not very exciting. When people start reminiscing too much about the past and glorify it by saying that things were much better then than now, you know that they are growing old. And it is a known fact that feeling old has nothing to do with age. Being in the present and anticipating the future is young, while being nostalgic and resentful of change is old. People can be young or old at any age. If they are old in a young age a possible way to describe them is conservative.

This is what I did not like in this exhibition. Smith is supposed to be one of the most iconic British photographers and actually the one that represents Britishness better than most and indeed he has done an amazing job in focusing on history and its importance. He has also done a great job in producing a body of work that is ultimately a “memento mori”, a reminder of human mortality. This is achieved through the importance that is given to the power of decay and the way in which it is implied that nature is destined to destroy whatever man has created.

However there are some things that are very intrinsic to Britishness that are totally left out of these images. Eccentricity, novelty, innovation which all have one foot already in the future and look forward to change. Smith’s images focus in the past and whatever is destined to disappear and die. Naturally death is always present within life and truly there are no new beginnings without something being lost or left behind. There is always pain over the loss but the pain is partly overtaken by the joy of the anticipation of the new. Here the new is not even implied. This very conservative way of looking at things is most definitely not what speaks to my heart. Still this exhibition is very much worth seeing.

The exhibition will be on until the 6th of December 2014