Architecture has been a favourite subject for artists throughout history. One of the obvious reasons is that it is very static and geometric but I find this to be too shallow of an explanation. Anything that qualifies as architecture constitutes the man-made part of our environment and as such it materializes its social structures and politics. However it also carries multiple layers of symbolism referring to the human condition. Still -as the curators of Constructing Worlds exhibition Alona Pardo and Elias Redstone have eloquently mentioned- it is extremely challenging to translate its material and sensorial aspects in a two dimensional image. This collection of images demonstrates with an interesting variety of styles of photography how this obstacle can be overturned into an asset. The very personal and ultimately subjective point of view of each photographer, highlights qualities that make up for the loss of the third dimension.

The photos on display at the first floor where the exhibit begins are more or less objective in documenting their era. Downstairs on the contrary the photographs are more subjective and artistic. The images are organised in a chronological order so the first artist one comes across is Berenice Abbott who is famous for her breathtaking 1930’s New York photos. This old-school depiction of the city which architects will always be fascinated with, is spectacular. Artistically and compositionally, the photos are perfectly balanced but most importantly they somehow manage to capture the frenzy of innovation that New York embodied at that time. Its aspiration for expansion and the hope of a new world are encompassed in them and therefore they are eternally modern.

While Abbott is known for zooming out and looking from afar Walker Evans is very famous for a series of pictures that he took to document the devastating effects of the Great Depression. In order to do so he zooms-into the lives of people in an almost voyeuristic way. He looks at every detail of their houses, in fact he looks close into every detail of their faces concentrating more on the personal aspect of architecture which reveals also a lot about the collective.

Those who have studied architecture or its history should be quite familiar with the Shulman photos than come up next in this exhibition. The legendary case study houses, naïve as they may seem in showing-off post war luxury and picture-perfect families, are considered historically important. The Eames and Koenig houses are design prototypes that haunted generations of architects who tried to follow their example. 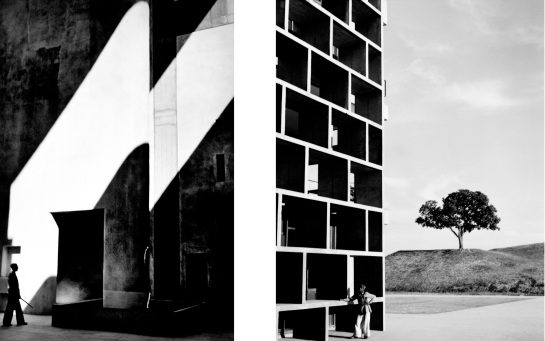 Lucien Hervé was not only admired for his unique talent but also for the opportunity he had to be Le Corbusier’s chosen photographer in documenting his iconic work. He travelled to Chandigarh to witness the construction of the High Court of Justice and the Secretarial Building. The images reveal the dramatic chiaroscuro that is created by the concrete and India’s sunlight and are works of art in their own right.

Bernd and Hilla Becher have contributed the photographs of 21 water towers displayed in a rectangular grid formation. Sculptural and monolithic as their subjects are reveal the contradictory beauty of industrialisation that most contemporary architects are drawn to.

Stephen Shore’s photographs document the environment where pop culture occurred. They depict everyday spaces, back streets, garages and fire escapes but their vibrant technicolor palette along with examples of design like cars or characteristic fonts on street signs, unmask the very specific age that they derived from.

In the downstairs part of the exhibition where the work of more contemporary artists is displayed things get much more personal. In fact the images at times seem almost psychoanalytical revealing more about the actual photographers than about the buildings and their architects.This does not mean that architectural photographers of previous decades did not have a personal point of view. True to their time though their opinions were more subtle and sought to highlight the buildings more than their own perceptions of them. Contemporary photography is less detached and objective. It is actually the exact opposite: involved and engaging and by putting the photographer’s interpretation forth it speaks of an artist’s dreams or nightmares but also of politics, social structures and conflict.

One of the exhibits I liked the most was of Hiroshi Sugimoto. He chooses architectural icons such as Le Corbusier’s Ronchamp chapel, Frank Lloyd Wright’s Guggenheim Museum and Yamasaki’s Twin towers of the World Trade Centre. The photographs are out of focus and simple as this idea might be the effect is spectacular and the possible interpretations can vary. These buildings need no introductions they are historic lampposts and as such they hold actual or symbolic memories for most.

Hélène Binet has photographed Daniel Libeskind’s famous Jewish Museum in Berlin during construction. The play of light through the dramatic windows of a building that is considered a sculptural monument on its own, seem even more interesting as rough slits in the wall. Without glass panes and finishes weirdly imply that they could have remained like that, unfinished.

Andreas Gursky chooses to alter architecture through digital manipulation. This as a method is largely used in our days although the effect is not always so blatantly outspoken. In Gursky’s work the goal is to make a very specific social commentary about the way societies are structured and how these structures are reflected on the built environment.

Another photographer who creates truly haunting images is Bas Princen. His work is focusing on five cities Istanbul, Cairo, Amman, Beirut and Dubai. He is interested mostly in urbanity and the way that cities by expanding reveal a lot about the social fabric that creates them. I stayed quite a while in front of the photo of Mokattam (Cairo) where every inch of open space in the area depicted is covered with trash as the city’s economy is based on recycling. I felt similar awe by looking at the image of the cooling plant in Dubai. Sleek, megalithic and soul-less brought to my mind the black slate surrounded by apes at the beginning of Kubrick’s 2001 Space Odyssey.

A similar feeling of abandonment is evoked in the photos of Guy Tilly. Late-modernist post colonial blocks in decay speak eloquently about the false promises that were given to Africans. Decay is also one of the central themes in Simon Norfolk’s photographs but this decay is inflicted suddenly on the cities that he visited because of war. Sadness but weirdly also irony is the message that he seems to convey, especially in the images of vibrant natural sunset colours.

The large format pictures of Nadav Kander who has travelled in China to document activities and structures across the massive Yangtze River portray a country that is extremely contradictory. Traditional but modernised, communist but expanding with capitalist aggression. Vast but densely populated.

Iwan Baan photographed Torre David, the Centro Financiero Confinanzas in Caracas, Venezuela. A huge tower block that due to the 1994 financial crisis was left unfinished and empty for a decade. Eventually it was squatted by no less than 3000 inhabitants that transformed it slowly but efficiently until it became habitable. Their apartments and communal activities are displayed in these images which document an impressive collective venture that seemed to have worked wonderfully for a number of years. The housing shortage which is a global problem and a possible solution are both mentioned here along with Torre David’s unfortunate ending when its residents were evicted in the summer of 2014.

Architectural photography has changed a lot throughout the years and this exhibition follows its transition. The photographers portray the buildings and the history of the people who created them because undoubtedly in observing architecture closely one is actually looking at humanity and its ways of inhabiting the world. This collection of images reveals a lot about political history and art history as well. We see clearly how artists true to their time crossover from a hopeful but also clean-cut way of being to a deeper, quasi- psychoanalytical manner of looking at society and its material creations. Uncomfortable as it might be, our world seems to be getting increasingly unfriendly and with more conflict than ever and it is no coincidence that these artists choose to highlight that.

If you are in London until the 11th of January do not miss the chance to catch this exhibition.

Read more information about the photographers at the exhibition here